I've signed up to run games at BritishFest, a new local con dedicated to all nerdy things from the UK. Being what it is, I have themed my offerings appropriately:

Sunday morning I am running Space: 1889. While not a British game, it does take place in a pseudo-Victorian setting, so I think it will fit nicely. I'm adapting an old scenario I found on the internet, though I need to change it considerable as it was meant to be the introduction to a long running campaign.


I'm hoping I get to play in a session of The One Ring that is supposed to be running as well. I have about a month to prepare yet, but I intend to be ready to roll.

Posted by DMWieg at 7:27 PM No comments:

An Observation about Masque of the Red Death

...the Ravenloft thing, not the Poe thing.

I just noticed last night that Shane Hensley wrote much of the boxed set for MotRD. If you didn't know, Hensley created the Deadlands setting. I can totally see the parallels between the Gothic Earth setting and the Red Death and Deadlands with its Reckoners/Manitou.

There's a even a picture in A Guide to Gothic Earth that features a posse of undead cowboys that looks like it could've been pulled straight out of the original edition of Deadlands.

This means that my Ravenloft boxed set can also double as a sourcebook for Deadlands detailing the rest of the world. Sweet jesus.

This also brings to mind the time I set out to convert the entire Ravenloft Monstrous Compendium Index to original Deadlands... I'm all about that Red Widow.

Phase Without Number: The Mega-Damage Elephant in the Room

So, I want to run a game for my Skype Group set in Palladium's Phase World/Three Galaxies setting, but I don't want to use the Palladium system; I want to use Stars Without Number.

I've been thinking about how to do Mega-Damage in a D&D like system, and I have come to the following conclusion: Screw it.

This is how it works: Tech Levels.


Weapon and armor of the same Tech Level work normally against each other.

Weapons vs. armor of a higher TL-  For every TL higher the armor is, the weapon inflicts half damage if it hits. A TL 2 weapon is going to do 1/4 damage vs. TL 4 armor.

Weapons vs. armor of a lower TL- For every TL below the weapon, the armor is treated as being one category lighter, or 2 AC worse if you're going by the book. So, TL 4 armor that grants AC 4 grants only AC 6 vs. TL 5 weapons. The worst an armor can provide is AC 9, the equivalent of unarmored, meaning that the weapon essentially blows straight through the armor.

I've always loved Ravenloft. I started reading the (admittedly terrible) novels in junior high and even into high school, when I had otherwise washed my hands of fantasy fiction. (I turned kind of snobby for awhile. It was a thing. ) I only played Ravenloft as an RPG a handful of times, mainly because I became convinced that AD&D was absolutely the wrong system for the setting. I always thought that perhaps FUDGE was a better fit, and I did in fact run a Ravenlofty FUDGE game once in college, just a one-shot deal.

However, LotFP has actually given me the idea that Ravenloft is fine, just fine, with AD&D or a D&D clone as the engine behind it. The flavor of Ravenloft doesn't exactly gel with the default flavor of LotFP, but I think it's close enough for me.

There are a few conceits from yesteryear that I have abandoned.

1. The PCs should be able to beat the monster in a straight fight.
2. PC death is something to avoid.
3. All the "interesting" monsters are too powerful for starting characters
4. PCs don't want to play spellcasters in a setting with unpredictable magic.

Today after I finish work, I plan to take a look at the Guide to Gothic Earth and see how well the classes in it map to LotFP, as well as how easily I can make the proficiency system into an X-in-6 setup.

This is what I'm thinking: RIFTS Phase World/Three Galaxies, but using Stars Without Number as the rules. I'm taking the basic ideas and concepts, not trying to convert e'erthang.

Terror in the 1890's, The Fruits of Collection, and Other Things

I was at the used bookstore recently when I came across the Ravenloft boxed set Masque of the Red Death. I always kind of wanted it, and although it is somewhat water damaged, it's serviceable and a damn sight cheaper than what people are asking for it secondhand online.

Then it struck me: convert the proficiency system to something more LotFP-esque and run this motherfucker for my online group.

They have recently been asking for space operate, but I will first ask them how they would like a classical gothic 1890's romp... followed by space opera.


Also, in a few days I will be in physical possession of every RIFTS World Book except for #32, which is at the printers. I feel a mixture of accomplishment and a powerful need for a bleach bath.

The last day with students is this Friday, after which I plan to kick it into gear and get something ready to go for BritishFest and KantCon. I like GMing. I like it boatloads, exponential boatloads more than I like playing a PC, and it's time to get this on.

As much as I'd love to own the new restoration of Metamorphosis Alpha...

...it's eighty fucking dollars. What, a buck for every year it's been around?

I'm not hating on Jim Ward, or Metamorphosis Alpha, or Goodman Games. I'm just saying... if I'm going to pay eighty bucks for a rulebook, it had better be a.) gold plated, or b.) come with a slave.

The PDF is available for six bucks, but damn I'd have liked a dead tree version... or one that costs less than a new car battery, at least.

What the Fuck Are You Supposed To Do in Traveller?

In my gaming pre-history, I read about Traveller in a book about RPGs that J. Eric Holmes wrote. He had an example of play from Traveller that involved flying cars and floating turnips. It seemed pretty cool. (Minus the turnips. I was a serious child back then.)

In 7th grade, I bought the boxed set to MegaTraveller. I ran it a couple of times, but I really had no idea what I was doing. I recall an adventure that consisted entirely of a layover at a casino space station that ended in a gun battle with snake men...and really very little in the way of consequence.

I also recall an adventure where I placed a crashed starship for the players to find, and I recall a massive indifference to said starship.

Shortly thereafter, we migrated to Gamma World (then in its 4th edition) because elephant men and tiger men with plasma guns is fucking cool to 7th-8th graders.

I didn't touch Traveller again until I gave the Mongoose version a shot in 2011.  (I blogged about it on this very blog, in fact.) At the time, I was totally inspired by the Mass Effect game series (the third installment hadn't yet taken the wind right the fuck out of my sails) and I wanted some starfaring adventure.

....what I got was pretty much my players constantly doing cargo runs to barely pay the mortgage on their ship, but the cargo runs ended up leaving them no time to address the various events I had sprinkled around the sector to provide adventure, including a fanatical cult bent on ripping open a lost jump gate to usher in some truly horrible cosmic event. (This would've actually slotted seamlessly into Stars Without Number's implied setting. Alas.)

When I occasionally read about people playing or remembering Traveller, it almost always includes some kind of economic enterprise that the PCs are involved in.

So, Traveller veterans, answer me this: Is Traveller seriously just a game set in a Niven-esque universe were a bunch of middle aged retired dudes truck around reselling shit like some kind of galactic Ameriprise outfit? Is it, in essence, a game about interstellar mid-life crisis? Is my perspective on Traveller just whacked out? 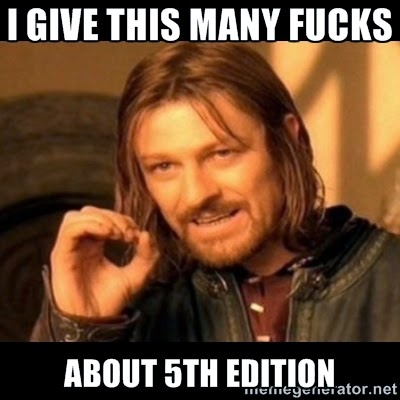 In all seriousness..... no, actually, I am being serious.

I could be less acerbic and say that I am presently satisfied with vintage iterations of D&D which I already own on my shelves at home, but what's the fun in that? This is the internet.
And the bands I listen to are cooler than the ones you listen to, so suck on that.

The number of games on my shelf is TOO DAMN HIGH.

I had the chance to get both corebooks for Wayfarers for ten bucks total, but I passed. I may collect games, but I am beyond saturated with fantasy games.

Josh is going back to KS this summer, but until then he is running Deadlands on Friday nights. I'm playing a former US Army ornithopter pilot with a prosthetic arm and a prosthetic leg. (Any one you can walk away from, they said...) Josh plans on running a follow-up game of Deadlands Noir upon his return this fall. I have offered to run for the group in his absence, though I don't know what I'll run yet. (Probably something Savage Worlds, to keep them in the groove) I consider Josh to be the Deadlands Master, so I'm very much looking forward to this.

I have all but dropped out of Steven's Thursday night game, which makes me sad because he is a killer GM and possibly the foremost Palladium expert I have ever met. (For one thing, he can take that mess of rules and make it run.) I have numerous school functions that invariable fall on Thursdays, plus lately it seems that night I am always tired and stressed.Perhaps the approaching summer break will allow me to rejoin.

My Sunday online group goes neglected, though perhaps no longer since I have no graduate school stuff owning my soul. That group was never regular, so at least there's that. They still need to experience the coalesced joy that is A Thousand Dead Babies.

With only a month and a half before KantCon, I need to get my ass in gear for something to run. My X-plorers idea churns in my head, and I'm thinking about busting out some Dungeon Crawl Classics or something as well.