1. Going to be transitioning the Thursday game back to the austere guidance of Steven. I know that in about two-three weeks he intends to resume Beyond the Supernatural, and I am totally down. Hopefully I can pound out a few more tower levels and let my PCs kill or join a Necromancer before I hand the reigns back.

2. The Sunday Ravenloft game is going to move to every other week.

I figure running 1.5 games (Friday night Deadlands and every-other-Sunday Ravenloft) will result in much, much better games.
Posted by DMWieg at 8:51 PM No comments:

Central Casting Dungeons, or, How to Spend Way Too Much Time Making a Boring Ass Dungeon

When I first moved to this town, I played in a campaign that used Central Casting to generate characters. We ended up with a guy who had a horse tail and a pair of twins, though one was born in an alley and one in a cave. Everyone was so poor they started with no equipment. One character owned another.

It fucking sucked, and we hated our ridiculous characters from the get go.

When I saw Central Casting Dungeons at the used book store, I should've known better, but it was like five bucks and appeared to be a big book of generating dungeons.

There's a table to tell you what metal a dungeon's smith specialized in.

The alchemist's room? Yeah, nothing except rolling to see what the dimensions of the room are.

Maybe I'm just spoiled by shit like the One Page Dungeon context and the early Raggi stuff and all you crazy bloggers and The Dungeon Alphabet... CCD (ha!) is just a big book that generates elaborately dull dungeons.

I suppose I should be thankful that I merely find this book bland, as opposed to the bile that usually rises in my throat from previous experiences with Central Casting books.
Posted by DMWieg at 10:40 PM 2 comments:

So, JB asked me for further explanation on how I run Rifts with my sanity intact.


1. At the core, you're playing heavily house-ruled AD&D. You have classes, experience points, alignment, levels, hit points, saving throws, attack rolls resolved with a d20, etc. When the rules seem to get all sideways on you, just take it back to D&D.

2. House rules I use: 1 Mega-Damage=10 SDC. Pass-through damage from Rifter #30. If you don't have Rifter 30, just swap this out instead: For every 10 MD your armor takes, you suffer 1d6 SDC. Double it for impact weapons like missiles/rail guns. Half it if you're wearing heavy armor. Close enough.

3. This is meant to be a ball-out, over-the-top game. The Coalition are like the bad guys from an 80's toy line. Juicers are guys who have FUTURE STEROIDS pumped into their bodies and wear mohawks because...metal. Play this game like you're playing a heavy metal album cover from before the 90's.

4. Bring your descriptive and adjudicative A game when running combat. For Pete's sake, the characters are carrying firepower enough to level buildings. Reward them for doing bat-shit insane things.

5. When the rules make something silly happen, make a ruling. Change a number. Do whatever you need to do.

6. Don't feel obligated to include all the books, or even most of them, in a given campaign. My Rifts game takes place in and around Madhaven, which is the ruins of New York City. There's no stuff from Rifts Russia or Rifts Australia or Skraypers or anything like that. The books KS releases detail the entire world. There's more than enough material in the core book and one or two splats to fuel a campaign.


I'm not sure if this is what you were looking for, but they are a few more specific points that I use to keep the game in perspective. The first rule overrides all the other rules. You are playing something akin to Arduin, but with cyborgs. (Did Arduin have cyborgs in it? I confess I am ignorant when it comes to all things Hargrave.)
Posted by DMWieg at 2:04 PM 4 comments:

In Which I Indict JB, With Much Adoration and Goodwill

JB, this is for you.

Re: JB and Rifts 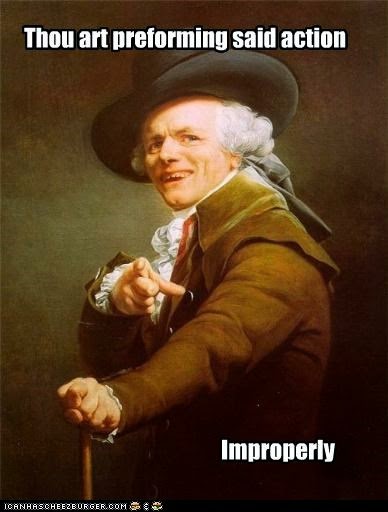 I still haven't really figured out how to throw reasonably appropriate monsters at my RIFTS group. I just kind of pick monsters that sound cool. They usually get utterly trounced. Combat is really kind of an afterthought in a game where dudes lug around particle canons and nano-swords made from bio-wizardry and what the fuck am I even talking about juuuuuuuuuuuice!

Right now I'm all about the environment in the game. I try to give my players cool shit to interact with. I think I had some Lamentations-esque rooms in my necromancer tower last night. (Lamentations-esque meaning creepy and unsettling, not pushbuttonruincharacter.) The players also managed to ruin both a "safe recovery" room and a potential source of information though general carelessness. Ooooops.

I play fast and loose with the rules. The Ley Line Walker in the party has managed to semi-accidentally learn two Necro-Magic spells, and I offered a non-spellcasting player the chance to acquire the ability to use Necro-Magic. Both of these things are technically against the rules, but meh. I am constantly hand-waving things in RIFTS, because to do otherwise is to court madness.Wit h Rifts, you pretty much have to go style over substance. I think of RIFTS as more of an attitude rather than a set of rules.

The game is a little horror-ish right now, but hey, necromancy should probably be a little horrifying, right?


Tonight I am filling in for our Deadlands GM. When I fill in, we actually play a different campaign that is also somewhat divergent from "default" Deadlands. My Skype group is also set to resume on Sunday after a month long hiatus, the game being my house-ruled Ravenloft/Masque of the Red Death/Gothic Earth game.
Posted by DMWieg at 3:34 PM 3 comments:

A Brief But Stunning Confession

I predict, at this point, that I will like it more than 4e and 3.x, but that will not like it as much as as BECMI/1e.

I'm not sure when I'll have the chance to try it, or with whom, but I do want to give it a try.